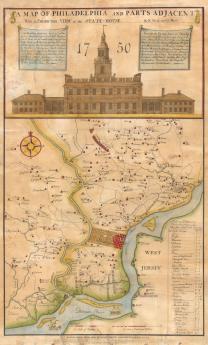 The Continental Congress met in Philadelphia from 1774 to 1788. Next, the new republic had its capital here from 1790 to 1800. Thoroughly Quaker Philadelphia was in the center of the founding twenty-five years when, and where, the enduring political institutions of America emerged.

DELEGATES from the thirteen original colonies met in Philadelphia in 1774-1776 to seek a way to become full Englishmen instead of mere colonists. Failing that, some were willing to revolt from all British rule, some were not. The Monarchy, however, never retreated from its position that all such questioning of authority was treasonous, so hostilities became inevitable. Although there was agreement to work together under a 1777 draft of the Articles of Confederation, even this preliminary constitution was not finally ratified until 1781, and was in any case mostly a treaty among allied tribes rather than a national charter. Finally concluding the war in 1783, the colonies struggled for four more years to make this definition of affiliation workable.

IT was George Washington who decided in dismay that such looseness was entirely inadequate for maintaining law and order, if Shay's Rebellion in Massachusetts was any indicator. That Puritan colony which mostly stirred up the original uproar, gave signs of willingness to live in anarchy indefinitely, even with John Hancock as its governor. Washington reviewed his many frustrations attempting to defend the Confederation during its Revolution, which for him had been an eight-year nightmare of underfunding and irresolute behavior by the state legislatures. What is more, the state Legislatures now outraged creditors by debasing their currencies, offended merchants by arbitrarily dishonoring private contracts. George Washington was a soldier and a farmer, uncertain what a good constitution should say. He only knew he didn't want a King, and he didn't want anarchy.

ENLISTING young James Madison as his secret agent, Washington's wide associations during revolutionary days made him aware of widespread dissatisfaction among American leaders about factionalism, economic and monetary deficiencies, and concern that the British might recognize our weakness and reassert control. For his part, Madison's previous study of the history of earlier republics under Witherspoon at Princeton provided the two Virginians with a reasonably specific outline of what needed to be done, what needed to be avoided. Madison turned out to be an adroit politician, and Washington's personal prestige suppressed other opposition. The Constitutional Convention was composed of the most influential citizens of the colonies because they could not refuse Washington's invitation, while even the few famous resisters like Patrick Henry, were undermined by reluctance to oppose Washington openly.

EVEN so, the final 1787 Constitutional proposal was only narrowly ratified. Almost all subsequent critics confess that most of their suggested improvements would almost certainly have defeated the whole project. The capital city was moved from Philadelphia to Washington DC as a result of vote-swapping by Alexander Hamilton and James Madison acting on behalf of Thomas Jefferson in the background. Consequently, it is strikingly difficult to find statues, portraits or historical markers mentioning these three, in Philadelphia two centuries later.

JEFFERSON and Madison destroyed the Federalist Party, but the last major Federalist to survive in government was John Marshall, Jefferson's hated cousin, who had once been a devoted aide to Washington at Valley Forge, and later wrote his five-volume biography. The Chief Justice of the Supreme Court took advantage of his lifetime appointment to refashion adroitly the position of the Court within three balancing arms of government, and hence established property rights as the unwritten cornerstone of all other rights. Even William Penn could not have done it so cleverly.

WHEN Marshall died on July 6, 1835, the nation's capital had been in swampy Washington for 34 years, during none of which had Marshall been on the bench in Philadelphia. But the day of his death marked the end of the spiritual dominance of Philadelphia attitudes in the political life of the Republic, coming shortly before that other signal event, when Andrew Jackson destroyed Biddle's Bank. It is entirely fitting for traditions to record the Liberty Bell was cracked and silenced, while tolling for John Marshall's funeral.