Revolutionary War Era
The shot heard 'round the world.

Philadephia: America's Capital, 1774-1800
The Continental Congress met in Philadelphia from 1774 to 1788. Next, the new republic had its capital here from 1790 to 1800. Thoroughly Quaker Philadelphia was in the center of the founding twenty-five years when, and where, the enduring political institutions of America emerged.

Worldwide Common Currency and Corporate Headquarters
The Death of Money

The Signers of the Declaration of Independence

The Signers of the Declaration of Independence

It was ratified by the Continental Congress on July 4, 1776. This anniversary is celebrated as Independence Day in the United States. The handwritten copy signed by the delegates to the Congress is on display in the National Archives in Washington, D.C. 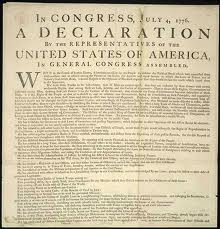