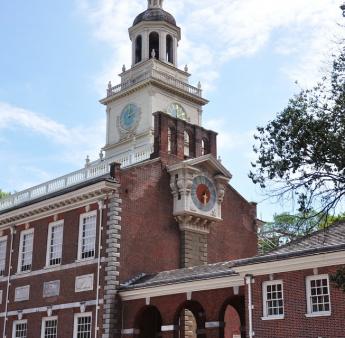 The states of Pennsylvania, Delaware, and New Jersey all belonged to William Penn the Quaker in one way or another. New Jersey was first, Delaware the last. Penn was the largest private landholder in American history.

A million college students and visitors annually take up residence in Philadelphia, tend to business, then gone home. They overhear scraps of history and unfamiliar names, stroll past curious buildings of whose history they knew very little. This website is for their recollections, recognizing how ex-residents often retain curiosity about these Quaker Colonies, even from a distance. At the moment, Philadelphia is a wonderful place to retire, unless you insist on having it warm in the winter.

Future visitors need a weekend guide to the funny city where they find themselves; their affection for the town may be more enduring than they expect. It's also gratifying to sense possessive local patriotism by working class Philadelphians, the people who talk about "Philly" instead of "fa-Delf-ya" but are no less owners of the place. Because of shyness, they seem to prefer to hear history from a single voice, even though multi-voice encyclopedias often contain more precision.

We begin with a five-day study tour. There's first a one-day walking tour of the center city district, which owns America's most historic square mile. It's helpful that William Penn laid out the streets with a compass, numbered streets North-South, streets named after trees East-West. Next, one-day driving tours both to the North where Washington and Howe did battle, and to the Welsh Barony along the Main Line, going West. Finally, a two-day tour down the New Jersey side of Delaware Bay, across the Bay by ferry, home along the state of Delaware side. That's the four points of the compass, with a city in the center.

But by no means the full extent of what's fascinating. If there's time, take a Sunday excursion along the upper Delaware on the Riverline railroad. Or, a trip up the King's Highway and back down the Jersey coastline of beaches. A ride on the Paoli Local, or the Chestnut Hill Local. House tours, garden tours, architectural tours, and some descriptive visits inside the big law firms, the big hospitals, and the many volunteer organizations.

We firmly believe in our Trinity: the Brotherhood of Man, the Fatherhood of God, and, the Neighborhood of Philadelphia. We hope you will, too.