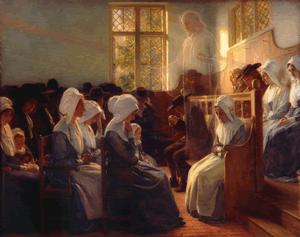 Of the original thirteen, there were three Quaker colonies, all founded by William Penn: New Jersey first, Pennsylvania biggest, and Delaware so small Quakerism was overcome by indigenous Dutch and Swedes.

Post-Revolutionary Delaware's leading family was DuPont, definitely non-Quaker. Nevertheless, after two centuries of dominance, the duPonts recently sold out to Dow Chemicals, exchanging family control for stockholder control. That's otherwise known as "cashing out". While it's too soon to be certain, recent intrusions of 1200 partners of Skadden Arps imply Wall Street lawyers could dominate little Delaware in the future. Not soon, but as relentlessly as Han Chinese intend to dominate Taiwan and Hong Kong.

Quakers once held Philadelphia, the largest city in America but voluntarily gave up political control without moving away. No controlling group had ever quite done that, but it was probably predictable from the prior case of the Welsh Barony of the Main Line, which refused power when they could see no point to having it. By the way, what is the purpose of political control of anything? Until that is explained, why do so many tribes go to the bother of it?

At first, or at least until railroads arrived, the West Jersey (Southern) half of New Jersey remained closest to what William Penn had envisioned, The Northern rest of it is essentially part of newcomer New York..

The Western half of Pennsylvania was settled by way of the Erie Canal, and Pennsylvania's modern political sociology was summarized by James Carville as "Philadelphia, Pittsburgh, -- and Alabama in between."

New Jersey divided into North and South, matching the original Quaker divisions of East and West Jersey, presently dominated by Menedez in the North, and Norcross in the South, uneasily held together by unions and the Mafia.

Only Philadelphia still has political machines of Nineteenth-Century style, seventy years Republican, then seventy years Democratic. Briefly, the Dilworth-Clarke aristocrats toppled the industrial Republicans in 1950, and since then political control has been contested between white unions and black voters, while aristocrats retreated by train and auto to the suburbs. It never bothered the Quakers much, so it was certainly predictable.

What's unpredictable is whether Philadelphia will gradually return to industrial Republicanism, or whether "eds and meds" (colleges and medical) will assert control by adopting the spirit of Republicanism. This alternative might take the form of women and blacks both splitting into two parts, then asserting control of the part which discards entitlements as a path to success.