Philadelphia Physicians
Philadelphia dominated the medical profession so long that it's hard to distinguish between local traditions and national ones. The distinctive feature is that in Philadelphia you must be a real doctor before you become a mere specialist.

Montgomery and Bucks Counties
The Philadelphia metropolitan region has five Pennsylvania counties, four New Jersey counties, one northern county in the state of Delaware. Here are the four Pennsylvania suburban ones.

City of Homes
At first, there were limitless forests, but then the city burned down. After that, the "Red" city has long been built of brick. Philadelphia's masonry future is unknown, but it won't be wood.

Route 611 begins at Philadelphia's City Hall and goes due north, headed for the Delaware Water Gap. In 1717 Lieutenant Governor Sir William Keith had decided he needed a summer residence to compliment his in-town establishment on Second Street, and acquired the 1200 acres of land of Samuel Carpenter on Easton Road, now Route 611. Sam had been entrusted with 2000 pounds against a possible French invasion, which Keith transferred to himself by taking Carpenter's land in lieu of it. The ethics of everybody in this transaction are now a little murky. The selected farm area was cool and tranquil, with creeks and level land, so a suitable three-story mansion was built of local stone, with outbuildings. A large mushroom-shaped rock was carved, polished and set on a pedestal beside the house. Tradition has it that Governor Keith asked servants and slaves to lift the stone as a test of physical strength. Keith had several negro slaves, eight or ten indentured servants, and others who were simply hired help for a rather large farm. Criticism was heard for the elaborate luxury of a mansion fifteen miles from town which it took five or six hours to reach.

Governor Keith was an interesting person. He inherited a Scottish baronetcy from his father and is the only Governor of Pennsylvania with a claim to noble blood. His finances were meager, however, and his life was a succession of efforts to advance his own wealth and position, which he regularly consumed with high living. He involved himself in coups and rebellions in Scotland, probably out of expectation of reward from the exiled King James. Efforts at court were finally rewarded by Queen Anne making him Surveyor-General of English land from Pennsylvania to Jamaica, but only after his nearly being hanged for treason for suspected efforts on behalf of the exiled former King James. Keith lost this essentially tax-collector position which he had performed creditably when the Hanoverian King George I took over the throne. After William Penn encountered difficulties which returned him to England, he and the Penn family were in need of an administrator in America, and Keith was at pains to ingratiate himself with Hannah Penn after William suffered several strokes from which he was to die in 1718. Most who met him felt that Keith was charming, although some regarded him as a charming rogue; he succeeded in ingratiating himself to the Penns and was appointed Lieutenant Governor of Pennsylvania in 1716, incurring substantial debts to transfer his family to America in style. After taking office, he wasted no time starting schemes and devices to enrich himself, while at the same time pursuing a populist political style which involved him in more or less constant controversy. There are many echoes in his career of that enduring subsequent conflict in America between creditors and debtors; as probably the most indebted man in Pennsylvania, his populism was highly troubling to conservative Quaker farmers. He pushed hard for paper currency, always popular among debtors, and probably sought to soften the feelings of the Quakers by pushing hard for the replacement of legally binding oaths with secular "affirmations". By doing so, however, Keith infuriated the vestry of Christ Church, representing widely held Anglican support for requiring oaths. Keith's pandering to differing viewpoints succeeded in infuriating James Logan, the secretary of the Penn proprietorship, into setting sail for England to seek Keith's removal from office. Logan only returned with a letter of admonishment from Hannah Penn, and controversy continued to simmer. Reduced to its essentials, a case can be made that Keith behaved like an unrestrained modern machine politician exploiting every opportunity he could find. 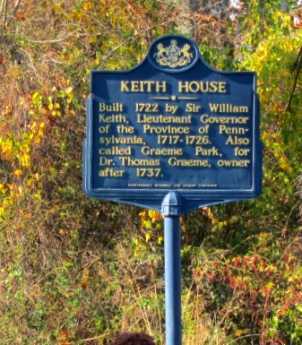 However, certain things can be said in Keith's defense. There is no doubt the Quaker farmers were hypersensitive about the display of wealth which a Scottish baronet would find quite appropriate for a man in his station. His mansion, for example, would barely qualify today as a five-bedroom house in the suburbs, and it is a little quaint to recall that generations of Penrose's and Strawbridge's subsequently lived on the property quite proudly, or even defiantly in view of their ample means. Paper money is indeed always the favorite of debtors who seek to dishonor their debts, but the colonies in Keith's times were suffering from a severe lack of space which can now be explained as the consequence of colonial terms of trade but which at that time was a severe economic hardship. His efforts to stop the practice of executing debtors may well have been made with his own indebtedness in the back of his mind, but still, it seems like a step in the right direction. Even the inventory of his property probably exaggerates the ostentation of his lifestyle. True, he had 144 chairs in the house, but the shortage of currency at that time had converted chairs into a form of exchangeable value, employed by almost every shopkeeper. Land was similarly used as a form of currency, although here most people would raise their eyebrows at a governor accumulating in eight years a list of property including not only this country estate and the downtown house in Society Hill, but a dozen rather large estates in other colonies, and a particularly troublesome investment in a copper mine on the west side of the Susquehanna. To some degree, Keith was a good Governor but was forced into a number of conflicts between the wishes of the settlers and the best interest of the Penn proprietors. Three thousand miles from the Court of St. James, he would scarcely be expected to display universal agility in shifting allegiance between the Stuart Kings, Queen Anne and the Hanoverian King George I, not to mention the Penn family and the settlers on their land. Keith did maintain reasonable stability in the colony while seeming to undermine the best interests of the Penn family. He was said to have made shrewd business decisions for the whole region converting surplus grain into malt at a time of money shortages in the colony, even though it particularly profited his own acreage. In some ways, his reputation remains chiefly tarnished by his treatment of Benjamin Franklin. Encouraging Franklin to go to England to buy some printing equipment, Keith promised letters of credit for what was presumably intended as a joint venture. The letters were never forthcoming, Franklin was stranded for months in England without means to return home. Franklin got his revenge years later in his autobiography. This was not the only example of Franklin nursing a grudge for decades. Poor Keith returned to England to defend himself against dismissal by the Penns because of all the turmoil and factionalism, but essentially never got another job and died in debtors prison. During that time he published extensively about current affairs and economics, but the value of that writing is now difficult to judge.

After Keith returned to England in 1726, presumably to defend his interests and possibly to evade his creditors, the mansion and estate on County Line Road was sold to Keith's son in law, Dr. Thomas Graeme who was a physician at the founding of the Pennsylvania Hospital in 1751 and evidently had become quite prosperous. Graeme paneled the interior of the mansion in high Georgian style, revised the floor plan, generally making the place elegant. Records of how the region between the counties became named Graeme Park, but presumably Graeme would now put up no objection to it. A second house on the property was home to several generations of Penrose's and Strawbridge's; the Strawbridge family donated the estate as a park. Governor Keith having left his wife forever to her distress alone, fathered two illegitimate children in England, making his prevailing emotions subject to uncertainty.

Around the corner, so to speak, on Route 611 the Horsham Friends Meeting is built of the same sort of stonework, with dates which suggest the meeting itself was present well before Keith appeared on the scene, and the string of similar but tavern-like buildings along 611 suggest the highway to Easton was a busy one even at an early time. Increasing traffic and construction carry an ominous prediction that growth of the area will eventually swallow both Graeme Park and Horsham Meeting in a sea of subdivisions and industrial parks. Placing a turnpike entrance nearby almost certainly hastened that fate.