Montgomery and Bucks Counties
The Philadelphia metropolitan region has five Pennsylvania counties, four New Jersey counties, one northern county in the state of Delaware. Here are the four Pennsylvania suburban ones.

The Pennamite Wars
The Connecticut farmers believed the King's last word overturned all earlier ones, else why be a king? William Penn's revolutionary idea was that of private property -- the first sale created a new owner, whose new word erased any earlier ones. When you acquire a new continent from aborigines, that's a congenial viewpoint. 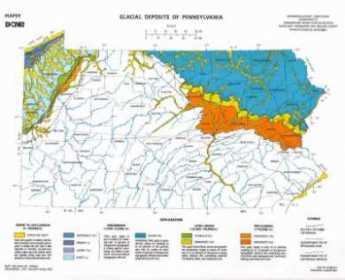 THE Colonial disputes with Great Britain were settled in 1783, creating great opportunities for the Colonies to resume their disputes with each other. Because of the unfortunate earlier action of the Penn Proprietors in selling land already occupied by Connecticut settlers, the legislatures of Connecticut and Pennsylvania behaved in ways that do them no credit. The situation could easily have led to more armed conflict, and it could even have gone from local war to fragmentation of the nation. So, although New York was close enough to know better, they joined with Massachusetts in offering to consider carving a new state out of Pennsylvania's northeast corner. The proposal was rejected, but the geological idea remains.

The northeast corner was once covered by glacier, and the region remains separated from the rest of Pennsylvania by a "terminal moraine", which is the huge pile of rocks and stones left behind after a glacier recedes. There are thirteen counties of rather desolate woods in this corner, with five or six more counties of moraine. Even today, some upper counties have only five or six thousand residents scattered in little settlements. The whole idea of creating a new state died when people got a chance to walk around and actually look at the region. Although one county is named Wyoming, this was not Wyoming, Fair Wyoming, at all; this was a pile of rocks. Moraines were what the Connecticut settlers were trying to escape.

However, their grandchildren might be unsure. Tremendous deposits of anthracite were soon discovered in the region, and then oil in Bradford County. Present residents of New York City will apparently commute endlessly to escape taxes, so an interstate highway or two would probably quickly make the area into Little Brooklyn.

The central point in all this was beginning to emerge. Since the Constitution was ratified, it simply no longer matters what state you were living in, as long as you can trust the legislature and the courts to be reasonably fair. These two combative legislatures and affiliated courts were once quite obviously behaving in a manner too obscenely partisan to be tolerated. Everybody involved in this mess could see the advantage offered by the ability to appeal to a superior power dominated by the other eleven (now, forty-nine) states. Carving out a separate state was not a compromise, at all. It was a threat, just as unsatisfactory to one combatant as the other.

Although it was clearly time to put aside the grievances and vengeances of a land dispute which had got out of hand, currents of other wild and headstrong ideas continued to swirl into the northeastern corner of Pennsylvania. In April 1786 Ethan Allen himself showed up in this region, wearing full Regimental uniform. He declared he had formed one new state and that with one hundred of his Green Mountain Boys and two hundred riflemen, he could establish another one. There is some reason to suppose Allen was responding to an action of the Susquehanna Company of Connecticut, which had held a meeting the previous September where Oliver Wolcott drafted a constitution for a new state named Westmoreland. William Judd was to be governor, John Franklin lieutenant governor and Ethan Allen was to be in command of the militia. The Assemblies of both Connecticut and Pennsylvania immediately reacted with outrage to renounce the whole State of Westmoreland idea; when John Franklin persisted, he was dragged to Philadelphia and thrown into jail to calm his rebellious spirit. Nevertheless, the point was dramatized that -- even five years after the Decision of Trenton had supposedly settled the matter, and after all sensible neighbors urgently wanted this dispute terminated -- something else needed to be done to strengthen the Articles of Confederation, or preferably replace them entirely.