City of Rivers and Rivulets
Philadelphia has always been defined by the waters that surround it.

When we think of water gaps, we tend to think of Harrisburg or Pittsburgh, with a wide river turning abruptly to run through a sharp cleft in a single mountain ridge. West Point on the Hudson might be a third well-known example. But the frontal ridge of the Alleghenies, variously called Blue Mountain, Blue Ridge Mountain, South Mountain, or Kennesaw Mountains, is several ridges wide. A gap in that sort of complex mountain range must be crooked and several miles wide to let a river of any size find its way through it. Presumably, this gap at Stroudsburg was formed by some huge volcanic action, because thick sedimentary layers are upended and exposed at the river's edge, with the water winding between the towering formations. To avoid going up and over a thousand feet of the mountain, human travel must follow the same path; a railroad, a little town, and several highways are crowded into the base of the cleft now filling up with gravel eroded from the cliffs. Even the birds need to travel several miles through the winding cleft in the formidable forests, with eagles and occasional turkey vultures coasting overhead, enjoying a ride on windy updrafts, casually on the lookout for lesser prey.

The Gap is a great intersection between New Yorkers and Pennsylvanians, mostly going somewhere else. The dominant Philadelphians got there first and tended to congregate in Stroudsburg where the Waring Blendor was invented within the once-flourishing Pocono region for fishing and getting away from summer fevers. As the jolly guide at the visitor's center chuckled, the New Yorkers tend to arrive eight busloads at a time and head straight for the bathrooms. After that, nowadays most species of city dwellers buzz off for somewhere else, leaving the Water Gap to darkness, and to me. 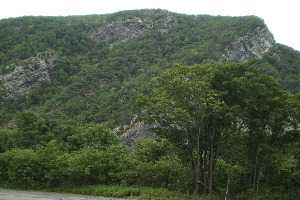 The Water Gap has at least two other outstanding attractions, however. For fifty or more miles along both New Jersey and Pennsylvania sides of the river, a Federal Game Preservation area stretches through the forests and cliffs to the New York border. You have to be pretty determined to get to it, however, because traffic is traveling in herds at eighty miles per hour past the few entrances. You can be hopelessly beyond the entrances before you recognize you are past the point of no return, or at a point where you can if you wish only make another try for it by finding a place to turn around, pay tolls, and risk your life between the cliffs and eighteen wheelers. If you have enough courage and eye/hand coordination, however, once you do get off into the quiet woods, you pretty much have Shawnee America to yourself. The Appalachian Trail crosses at this point, but hikers should remember you must wade the Delaware River to pick up the trail on the other side.

The other gem of this area is called the Shawnee, a 19th Century resort hotel of genteel note, with outstanding food and a famous golf course that you reach by footbridge to an island. PGA championships have been played here, and Fred Waring probably played some dance music once. At one time, there was a couple of dozen such mountain resort hotels scattered from Maine to Georgia, all of the American Plan, looking as though Scott Fitzgerald and Zelda would come lurching around the next corner. It's anybody's guess whether recessions and gasoline shortages will ruin these places, or whether the people who deserted this summer custom and went to Europe will remember these mountain resorts are here and save them. Right now, there are the golfers and the mountain hikers during the summer and the skiers in the winter. And then there are a few people who want to write or read novels, some conventions, a few tourists if they own a necktie.

This winding, several miles long canyon, once a forest fastness of the Shawnee, was perhaps their main bastion. That most powerful tribe of the Algonquin federation participated in a sixty-year war with the Iroquois and mostly lost. You can certainly imagine what a marvelous fortress this region was, containing protected fertile islands to grow food, interior forests which probably abounded in game, rivers full of fish, sheltering mountains with hidden entrance clefts from which to emerge and dominate the flatlanders in all directions. If you were going to be an Indian, this was surely the best place in the world to be an Indian.