Constitutional Era
American history between the Revolution and the approach of the Civil War, was dominated by the Constitutional Convention in Philadelphia in 1787. Background rumbling was from the French Revolution. The War of 1812 was merely an embarrassment.

Gilded Age
They made their fortunes in the West, but spent them in Philadelphia. Until they settled in the West, themselves.

The Progressive movement, around 1900, definitely included Teddy Roosevelt, but it is not so clear he started it. The James brothers sound like a better source.

William James and the Progressive Movement

Howard Callaway, noted historian, recently held forth at a meeting of the Franklin Inn Club about the Progressive Movement of the early 20th Century. His interesting point was that perhaps William James really started it all. The James brothers, William and Henry, were very rich and spent nearly twenty years in Europe. Their ideas may not have originated in Europe, but they certainly had a European tinge to them. Perhaps it is fair to surmise that the Progressives grew out of reaction to the Gilded Age, around 1870, which Howard feels was the last great episode of globalization before the present one.

In spite of the very European origins of Queen Victoria and her family, the British aristocracy has always feared and distrusted Europe. When Britain discovered it couldn't conquer Europe (or America), it turned its attention to developing a great commercial empire by colonizing Africa and East Asia. That led to building a Navy and establishing naval refueling stations at strategic places around the globe. Meanwhile, the Spanish empire was deteriorating, and colonization took on the form of competition between England, France, and Germany for the remnants of the Spanish empire. For background music, the Dreyfus episode led to or was prompted to lead to, an anti-military attitude that had considerable world-wide effect, essentially none of the above. In time, the none of above military attitude fused with Progressivism of the environmental sort which viewed industrialization as the enemy.

In a sense, American attitudes were influenced by William McKinley, who managed to convince labor they would be better off by advancing the cause of their bosses. Part of the reaction to this was the Populism of William Jennings Bryan and Robert LaFollette. McKinley's assassination and the promotion of Teddy Roosevelt was an unexpected turning point in American politics. Meanwhile, Admiral Dewey's fleet was stationed in Hong Kong. This association between America and Great Britain, along with secret German attempts to intervene in unobtrusive ways during the Spanish-American War were important factors in the later alliance between Britain and America in World War I. The burgeoning alliance between labor and management which McKinley was well along toward making the dominant force in American politics, was thus precipitously switched toward Progressivism by McKinley's assassination, which revealed he had made the one major blunder of selecting Teddy Roosevelt as his vice president, who in turn made the same blunder in reverse by selecting William Howard Taft as his own successor. The splitting of the Republican party between Roosevelt and Taft made possible the election of Woodrow Wilson, the college professor.

It thus can be concluded that the repeated switching between Conservatism and Progressivism during the Presidencies of McKinley through Wilson was the main source of the present rearranged coalitions we call the Republican and Democratic parties. It only remained for Franklin Roosevelt to complete the process by fitting the South, Catholics, and Jews into the Democratic Alliance, and Richard Nixon to undo it partially with switching the South and the Catholics back into the Republican party. The demography of the parties has changed more than the ideology, which tends more toward a coalition of business and Southerners versus blue-stocking progressives linked with labor union populists. Underlying all of this is the general acknowledgment of the need for a two-party system. Instead of having five or six small parties, the ultimate choice is whether a dissatisfied sub party is disaffected enough to switch parties. The nation is geographically so large and the subgroups so scattered that almost everyone except recent immigrants instinctively respects the two-party imperative.

Republican Presidential Convention of 1900 was held across the street from what is now Children's Hospital at 34th and Spruce Streets. Although the re-nomination of an incumbent President (McKinley) is always a boring, foregone conclusion, the Vice-Presidential nomination, in this case, was a hilarious circus. Boss Platt of New York hated Governor Teddy Roosevelt,and wanted him out of Albany. So he persuaded Boss Matthew Quay of Pennsylvania to engineer Roosevelt's nomination as Vice President, which Quay did by threatening to deprive the Southern states of half their seats at the next convention, then relenting when they agreed to vote for Roosevelt. This was highly displeasing to Boss Mark Hanna of Ohio, the National Chairman, who didn't like Roosevelt and hated even worse to be beaten on any issue. It looked like Roosevelt was going to win, except for one thing. Roosevelt didn't want the job, which is a notorious political dead end. In the event, after much scheming and rumoring, Roosevelt was the unanimous choice of the convention, except for one vote. He voted against himself.

The Convention presented two other ironies. The first was that everybody had it all wrong. McKinley was assassinated, and Roosevelt became President. Everyone involved would surely have voted the other way if it had been known what would happen.

The other irony was contained in a large electric sign on Broad Street during the convention. Two thousand light bulbs, quite a novelty for the time, displayed in large letters: THE PHILADELPHIA INQUIRER. MORE REPUBLICAN READERS THAN ANY PAPER IN THE COUNTRY.

The 1787 Constitution created three branches of government along with their defined powers but described no remedy for a branch overstepping its boundaries. Gradually, a system evolved for declaring some laws unconstitutional, one by one, clarifying individual issues along the way. By contrast, the founding fathers viewed the President as an agent of Congress, expecting Congress to devise controls if needed. George Washington had an intense distaste for monarchs, and eight years as Commander in Chief had exposed no taste for conflict with the Continental Congress. Unfortunately, this has proven to be unusual for Presidents, especially as popular sovereignty appears to expand the Presidential mandate. Moreover, Washington himself developed more friction with Congress during his two terms as President.

In retrospect, the main factor behind Presidential restlessness is the experience of misinterpreting the meaning of a broader electoral mandate, which can more properly be traced to hasty repair of the defects of the 1800 election process. Experience has shown that while ignoring rules invites anarchy, the impeachment of a President usually seems too drastic a remedy for unwelcome innovation while impeaching the whole Legislative Branch for failure to supervise in a general way, is incomprehensible. The President needs some sort of supervision. While the original intent was to have Congress do the supervising, the Supreme Court is now probably better suited for judging the issue of unconstitutional behavior, except for the awkwardness that the President appoints the Supreme Court. These are the simple ingredients of a solution, preferably unwritten and revolving around conferring special "standing" in special circumstances.

At present, grievances tend to accumulate until someone acquires "standing" by being injured. At present it is generally true a grievance scarcely matters if no one is injured, but the exception is the lack of redress for injury to the Constitution, whereby everyone may be injured. Furthermore, actual experience with creeping boundary encroachment has mostly proved to be nuanced, rather than confrontational, gradual rather than abrupt. The descriptive example is that of a frog in a gradually heated pan of water, whereby the frog is cooked faster than he realizes he is in danger. Otherwise, the courts have evolved an unspecified balance which has proved remarkably serviceable.

It took thirty years for John MarshalI to formulate the general approach needed. In Marbury v. Madison , his first action after becoming Chief Justice, John Marshall suggested a writ of Mandamus (i.e. "We command...") from the Court might well be the first step in what he coyly described as only a hypothetical situation. Only lawyers were expected to recognize fully that If the President ignored the writ, then the grounds for impeachment might escalate, with the President forced into the role of flouting a decision of the Court. Regardless of how it stood on the original issue, the public would likely support a Court in performing its duty to make difficult decisions.

One way or another, the national issue would become one of whether the nation wished to continue with its Constitution; Marshall had only outlined the steps the process would probably take. At several points along the way, the Chief Justice would have a chance to back off. But Marshall's lifelong hatred of his cousin Thomas Jefferson was so well known there was little doubt he was serious. Knowing of his cousin's hatred for him, President Jefferson let the matter drop; subsequent Presidents followed his example. Generations of lawyers have studied this case and pondered its implications. The solution to the problem of extending it from unconstitutional laws to unconstitutional behavior, probably already exists in many minds.

William James and the Progressive Movement 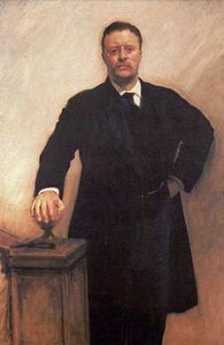 and The political bosses wanted to get Teddy Roosevelt out of the Governor's chair in Albany. As things turned out, they made him President of the United States.

The Constitution does not define penalties if one branch of government oversteps its grant of authority. But starting with writs of mandamus , the U.S. Supreme Court has left the other two branches with little alternative but compliance.