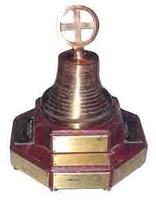 The Exchange luncheon club of Philadelphia, then meeting at the Bourse, withdrew from association with other Exchange Clubs on a point of principle -- hence the name it adopted, the Right Angle Club.

There is no one still alive who was present when the Philadelphia branch of the Exchange Clubs Association withdrew and renamed itself the Right Angle Club. Since these mens luncheon clubs tended to specialize in tall tales and ribald jokes, it is unclear how much credence should be placed in the ancient mythology of the event. It is fairly certain that the assertion is merely badinage that since the Reserve Clubs supported charities to prevent child abuse, the club which withdrew, did so because it was in favor of child abuse. It seems unlikely that this organization of stockbrokers were making reference to a carpenter's square, or that it particularly favored engineers and architects. While the club moved from the Bourse Building to the Bellevue Stratford Hotel, and thence for several years to the Engineers Club, the name is still not a reference to engineering.

The most plausible story about the name is that the proposal had been made that members follow the example of the Rotary Clubs, in keeping attendance and making up absences by make-up lunches. It is related that the Philadelphia group regarded this rule as childishness, and offered to pay for missed lunches, but rebelled at make-ups or other childish punishments. The Club does continue to charge for lunches three months in advance, and so the money for missed lunches is forfeited. However, the extra cash is used for the support of fancy dinners to which ladies are invited, so everyone can have the feeling that he gets his money's worth. Whether accidental or an outgrowth of shrewd planning, the business plan is quite a successful one.