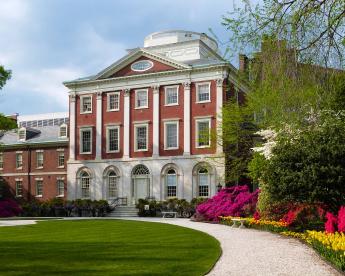 New England had a much more religious founding culture,

There are roughly a hundred colleges located within an hour or so's drive of Philadelphia. It probably reflects William Penn's spirit of religious tolerance that there are so many, because religions often started divinity schools to populate their churches with ministers. However, it took several decades for Philadelphia to see the need for even one, and that was Ben Franklin's University of Pennsylvania, which even today lacks a divinity school. As Digby Baltzell reminds us, New England had a much more religious founding culture, since promoting religious freedom is not exactly the same as promoting religion. As Philadelphia grew older, it experienced much more religious diversity, paradoxical as that may sound. Except for Catholics, which is sort of a special case. Today, about a third of Philadelphians are Catholic.

Today, most of the Philadelphia colleges are too small to be universities, but too large to disappear. Is it possible they could specialize more, reach eminence in more fields, and as an archipelago, do what they can never aspire to as colleges?