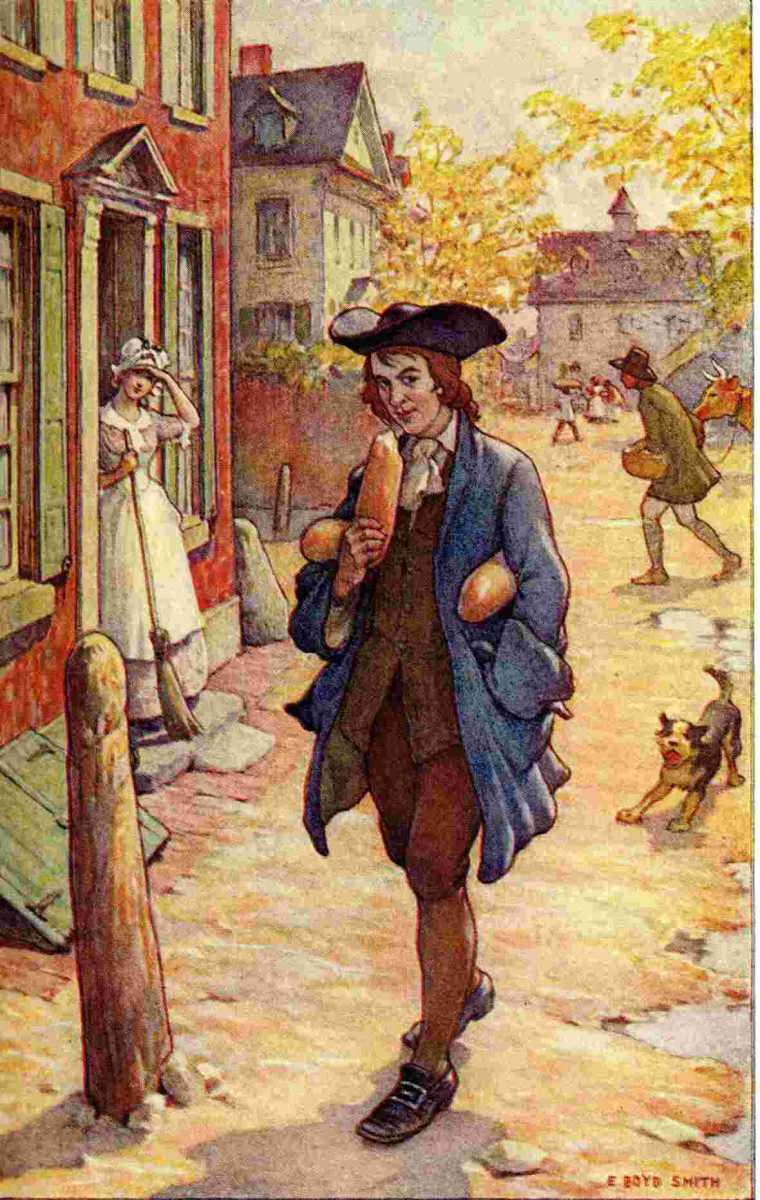 Historical Preservation
The 20% federal tax credit for historic preservation is said to have been the special pet of Senator Lugar of Indiana. Much of the recent transformation of Philadelphia's downtown is attributed to this incentive.

Quakers: All Alike, All Different
Quaker doctrines emerge from the stories they tell about each other.

The Proprietorship of West Jersey
The southern half of New Jersey was William Penn's first venture in real estate. It undoubtedly gave him bigger ideas.

Sights to See: The Outer Ring
There are many interesting places to visit in the exurban ring beyond Philadelphia, linked to the city by history rather than commerce.

Burlington County used to be called Bridlington. It contains Burlington City, formerly the capital of West Jersey, which is how they styled the southern half of the colony, the part controlled by William Penn. In colonial times, the developed part of New Jersey was a strip along the Raritan River extending from Perth Amboy, the capital of East Jersey, to Burlington. To the north of the fertile Raritan strip, extended the hills and wilderness mountains; to the south extended the Pine Barrens loamy wilderness. The Raritan strip was predominantly Tory in sentiment, while the remaining 90% of the colony consisted of backwoods Dutch farmers to the north, and hard-scrabble "Pineys" to the south, except for the developments farmed by Quakers. The Quakers had ambiguous sentiments during the Revolution, leaving conflicts between pacifism and self-defense to individual discretion. The real fighting mostly went on between the Episcopalian Tories and the Scottish-Presbyterian rebels, both of which were sort of newcomer nuisances in the minds of the Quakers. The warfare was bitter, with the Tories determined to hang the rebels, and the rebels determined to evict or inflict genocide on the loyalists. Standing aside from such blood-letting of course inevitably led to a loss of Quaker political leadership. When East and West Jersey were consolidated by Queen Anne into New Jersey in 1702, the main reason was ungovernability, with animosities which endure to the present time in the submerged form. Benjamin Franklin's son William was appointed Governor through his father's nepotism, but when he turned into a rebel-hanging Tory, his father extended his bitterness about it into a hatred of all Tories. The later effect of this was felt at the Treaty of Paris, where Ben Franklin would not hear of leniency for loyalists, striking out any hint of reparations for their property losses. In a peculiar way, the factionalism resurfaced at the time of the Civil War, where the slave-owning Dutch in the North came into conflict with the slave-hating Quakers in the South. The problem would have been much worse if the Jersey slaveholders had been contiguous with the Confederacy, but it was still bad enough to perpetuate local sectionalism. A few decades ago, it was actually on the ballot that Southern Jersey wanted permission to secede.

Under the circumstances, when James K. Wujcik wanted to work for progress in his native area, he avoided any ambition to enter State politics and concentrated his efforts on Burlington County. He is now a member of the Board of Chosen Freeholders of Burlington County, along with four other vigorous local citizens. Most notable among them is William Haines, the largest landholder by far in the area, whose family still controls the shares of the Quaker Proprietorship. Membership on the Burlington County Board of Freeholders is a part-time job, so Mr. Wujcik is also president of the Sovereign Bank. We are indebted to him for a fine talk to the Right Angle Club avoiding, with evident discomfort, many mentions of state politics or sociology.

Burlington is the only New Jersey county which stretches from the Delaware River to the Atlantic Ocean, including the Pine Barrens occupying 80% of the land mass in the center; fishing and resorts dominate near the ocean and former industrial areas along the river. Much of the area has been converted to agriculture for the Garden State, but about 10% is included in a National Preserve. The population has doubled in the past fifty years, so urbanization is replacing agriculture, which had earlier displaced wilderness. The county includes Fort Dix and Maguire Air Force Base, strenuously promoted for decades by now-retired Congressman James Saxton.

Somewhere in the past few decades, Burlington became quite activist. Although many tend to think of real estate planning as urban planning, this largely rural county went in for planning in a big way, deciding what it was and what it wanted to be. Generally speaking, its decision was to replace urban sprawl with cluster promotion. The farmers didn't like an invasion by McMansions or industries, while the towns lost their vigor through tax avoidance behavior of the commuter residents. Overall, the decision was to push urban development along the river in clusters surrounding the declining river towns, while pushing exurban development closer to logical commuting centers, leaving the open spaces to farmers. Incentives were preferred to compulsion, with a determination never to use eminent domain except for matters of public safety. To implement these goals, two referenda were passed with 70% majorities to create special taxes for a development fund, which bought the development rights from the farmers and -- with political magic -- re-clustered them around the river towns. The farmers loved it, the environmentalists loved it, and the towns began to revive. The success of this effort rested on the realization that exurbanites and farmers didn't really want to live near each other, and only did so because developers were looking for cheap land. Many other rural counties near cities -- Chester and Bucks Counties in Pennsylvania, for example -- need to learn this lesson about how to stop local political warfare. Corporation executives don't want to live next to pig farms, but pig farmers are quite right that they were living there, first. When this friction seeps into the local school system, class warfare can get pretty ugly.

In Burlington County, they thought big. The central project was to push through the legislature a billion-dollar project to restore the Riverline light rail to the river towns, along the tracks of the once pre-eminent Camden and Amboy Rail Road. It was an unexpected success. During the first six months of operation, ridership achieved a level twice as large as was projected as a ten-year goal. Along this strip of the Route 206 corridor, the old Roebling Steel Works are becoming the Roebling Superfund Site, now trying to attract industrial developers. The Haines Industrial Site originally envisioned as a food distribution center was sold to private developers who have created 5000 jobs in the area. Commerce Park beside the Burlington Bristol Bridge is coming along, as are the Shoppes of Riverton and Old York Village in Chesterfield Township. As Waste Management cleans up the site of the old Morrisville Steel plant across the Delaware River, a moderate-sized development project is becoming an interstate regional one.

No doubt there will be bumps in these roads; the decline of real estate prices nationally is a threat on the horizon, because it provokes a flight of mortgage credit. It works the other way, too, as banks decide to deleverage by reducing outstanding loans; this is the way downward spirals reinforce themselves. And anyone who knows anything about all state legislatures will be skeptical about political cooperation in a state as tumultuous as New Jersey. The Pennsylvania Railroad destroyed the promise of this state once; some other local interest could do it again. Nevertheless, right now Burlington County looks like a real winner, primarily because of effective leadership.

Real brain power on dislpay. Thanks for that answer!
With the bases loaded you struck us out with that aesnwr!